"Their insight, expertise and
experience provided us with
invaluable guidance during times
when we faced critical decisions."
Lewis MasseyMassey, Watson & Hembree
Home
Our Team
William Cleveland 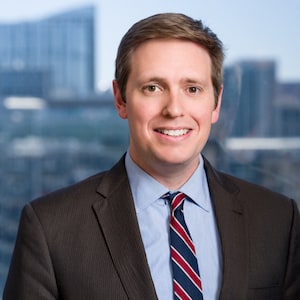 William ("Billy") Cleveland focuses his practice on wage and hour claims, as well as general employment law, workers’ compensation, and business litigation. Billy attended Elon University, earning his bachelors in sociology. While at Elon Billy founded Elon’s Ultimate Frisbee team, severing three years as team captain, and was a member of Elon’s first co-ed a cappella group. Once he graduated from Elon, Billy worked at Parks, Chesin & Walbert as a paralegal, where his passion for the law was solidified. He then attended the Walter F. George School of Law at Mercer University. While in law school, he was on the Dean’s List and was awarded a stipend for his Third-Year Practice Act with the Metro Conflict Defenders, working on major felonies. He also held an externship as a clerk with the Hon. Harris Adams at the Court of Appeals of Georgia.

After law school, Billy spent three years as an Assistant Attorney General for the State of Georgia, focusing on workers’ compensation. As an Assistant Attorney General, he represented Georgia’s state agencies, handling comprehensive workers’ compensation issues. He appreciated working with Georgia’s diverse types of agencies, gaining insight into all forms of jobs and worksites. While in private practice, Billy has successfully represented his clients in FLSA claims, including collective actions, discrimination actions, sexual assault claims, workplace injuries, personal injury, severance negotiations, contract disputes, and business disputes. He enjoys, and has extensive experience in, all levels of litigation, including pre-suit settlement discussion, mediation, administrative hearings, and trial and appellate practice.

Thanks to his time as an Assistant Attorney General representing the largest employer in the state, Billy has honed a unique and diligent approach to handling his client’s needs. He has a passion for working with people and businesses in a variety of issues. Every client and every matter is unique, so the approach to each situation must be as well. Billy understands that the majority of his clients are facing one of the most difficult times in their lives when they seek his representation, therefore he takes a wholistic approach in his advocacy and counsel.

In addition to his litigation practice, Billy works with his clients drafting contracts and operating agreements, working with employers on compliance matters, representing clients in federal and state audits, drafting employee handbooks, and assisting in policy work. The balance for employers between the always-important employee morale and compliance with the law, including proper pay policies, can sometimes be difficult; Billy works with employers to find this balance. In addition, he has also conducted several presentations regarding wage and hour laws.

Billy is a member of the Georgia bar and is admitted to practice in all state courts, including the Court of Appeals of Georgia and the Supreme Court of Georgia, as well as the United States Districts Court for the Northern and Middle Districts of Georgia. He is proud to be an Atlanta native. As a kid, his parents stressed the importance of community involvement, including volunteer work, coaching, and serving on advisory councils, something he still strives toward today. Billy is an avid sports fan, and enjoys staying active, reading, music, cooking, and most of all, loves spending time with his family.