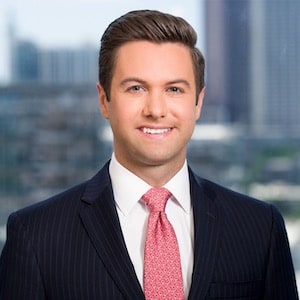 Rob graduated from Emory University School of Law in 2016 at the top of his class. In law school, Rob was awarded the Dean's Award for Outstanding Academic Achievement, served as an extern for the U.S. Federal Trade Commission, and clerked for the District Attorney's Office in Tennessee. Prior to entering law school, Rob attended Furman University where he earned his undergraduate degree in Political Science.

Rob has also been recognized as a "Rising Star" in business litigation by Georgia Super Lawyers for 2019, 2020, and 2021. Rob is a member of the Georgia Bar and is admitted to practice before all Georgia state courts as well as the United States District Court for the Northern District of Georgia.

Outside of the office, Rob enjoys traveling and is an avid amateur chef.