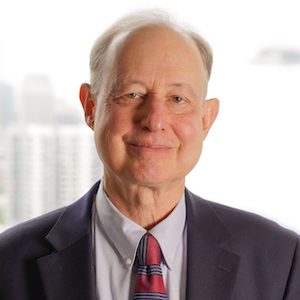 Larry H. Chesin is a Phi Beta Kappa graduate of George Washington University. He received his law degree with honors from the University of Georgia School of Law in 1979 and was admitted to the Georgia Bar that same year. Mr. Chesin practices before both state and federal courts in Georgia and elsewhere. He is admitted to the Bar of the United States Supreme Court.

Following graduation from law school, Mr. Chesin served as a law clerk on both the Court of Appeals of Georgia and the Georgia Supreme Court. In this capacity, he participated in the drafting of appellate opinions which interpret and apply both state and federal law. Since the completion of his clerkship in 1982, he has been an attorney with the firm.

Mr. Chesin’s practice is concentrated in civil litigation, where he represents both plaintiffs and defendants. He has represented parties in a variety of substantive areas, including complex commercial, real estate, will and contract disputes. Several of his cases have received national attention. On February 1, 2015, after 40 years with Parks, Chesin & Walbert, Larry retired from the full time practice of law and now serves as of counsel with the firm.

Mr. Chesin is a Master of the Bench in the Lamar American Inn of Court. He is also an active member of the American Bar Association, the State Bar of Georgia, the Atlanta Bar Association and the Lawyers Club of Atlanta. Mr. Chesin and his family live in the Virginia-Highland neighborhood of Atlanta. In his free time, Mr. Chesin enjoys music and travel.