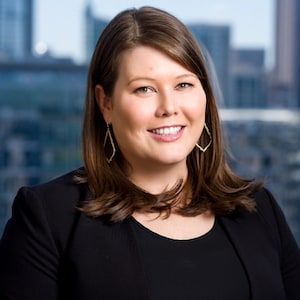 Jenn Coalson is a trial lawyer and partner at Parks, Chesin & Walbert who specializes in cases that involve women’s rights and workplace wrongs. She has extensive experience representing executives and management-level employees in discrimination, harassment, and retaliation matters. She also has considerable experience pursuing wage and hour claims and collective actions under the Fair Labor Standards Act (FLSA). In addition, she represents whistleblowers who have experienced retaliation, among other types of civil rights cases and complex litigation.

A fierce advocate for gender equality, Jenn serves as head of the firm’s women’s rights practice. In that capacity, she focuses a substantial portion of her practice on representing women who have been the victims of sexual assault, sexual violence, sexual harassment, unlawful pay practices, exploitation, and discrimination or retaliation in employment, education, or government services. Jenn’s dedication to these clients and her tireless efforts on their behalf have made her one of the leading women’s rights lawyers in the State of Georgia.

Jenn’s experience also includes representing government contractors in bid protests and related litigation. She has represented both successful offerors in defending an award, as well as frustrated bidders who were not awarded contracts in challenging the award. Jenn and the other lawyers at Parks, Chesin & Walbert have the skill and experience to successfully pursue these highly specialized and time-sensitive matters.

Jenn has experience at all stages of trial preparation, trial, and appeal in both state and federal courts as well as counseling clients through pre-trial negotiations, settlement discussions, mediations and arbitrations, and internal investigations. This breadth of experience has given her the tools necessary to achieve success—however the client defines it—regardless of the nature of the lawsuit and allows her to take on cases that other attorneys are unwilling or unable to pursue. She regularly draws upon her experience as a federal law clerk to work as co-counsel or local counsel alongside other attorneys in the Northern District of Georgia.

In 2019, Jenn was one of fourteen lawyers selected by the Fulton County Daily Report as “On the Rise.” She has been selected as a Georgia “rising star” on multiple occasions, an honor reserved for no more than 2.5% of Georgia attorneys, as well as a member of Georgia’s “legal elite.” In addition to her experience in private practice, Jenn served as a judicial law clerk to the Honorable Timothy C. Batten, Sr. in the U.S. District Court for the Northern District of Georgia, Atlanta and Newnan Divisions. Jenn regularly lectures and publishes on employment law, trial practice, and advocacy. She is a graduate of leadership academies put on by the State Bar of Georgia’s Younger Lawyers Division and the Georgia Trial Lawyers Association. She presently serves as a member of GTLA’s executive committee and the National Employment Lawyers Association’s Georgia board of directors, and as an officer of the Atlanta Chapter of the Federal Bar Association.

Outside of the office, Jenn lives in Atlanta’s Buckhead community, volunteers with the Arthritis Foundation, and travels as much as possible.