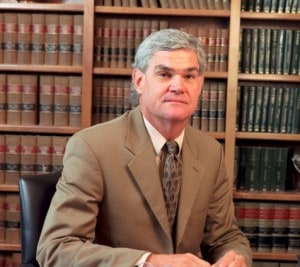 Ames Edward “Eddie” Eppinger, a bodybuilder addicted to prescription painkillers and an illegal steroid, was sentenced to 14 days in jail for traffic violations on August 21, 2000. Within five days he was dead, accidentally strangled by a deputy trying to move him into an isolation cell.

Plaintiffs’ attorney A. Leroy “Lee” Parks Jr., of Parks, Chesin & Walbert, and defense attorney Michael D. Flint, of Flint & Adler, agreed on this much in their opening statements Monday in a trial where Eppinger’s parents allege the underlying cause of their son’s death was inadequate medical treatment at the Fayette County jail. The plaintiffs allege that a reluctance to increase its costs prompted the private medical provider at the jail, Southern Health Partners Inc., to ignore Eppinger’s pleas that he needed help because he was suffering from drug withdrawal.

The case continues today in the Newnan division of U.S. District Court for the Northern District of Georgia before Judge Jack T. Camp. Eppinger v. Southern Health Partners No. 3:01CV00104 N.D. filed June 21, 2001. While there is no disagreement that Eppinger was accidentally strangled-the incident was captured by a jail video camera-the two sides disagree sharply on the obligations of the jail’s medical staff in the case. Flint told the jury that after listening to his opponent’s opening, “I thought I’d walked into the wrong courtroom.” Eppinger’s parents, Virginia and James Powell Eppinger, are suing Southern Health Partners, as well as its employees Dr. Manuel M. Fajardo and nurses Kathy Osborne, Karen Reid, Jeanette Reagan and Becky Sangster, alleging inadequate management of their 30-year-old son’s withdrawal from drugs while in jail.

Southern Health Partners is a Chattanooga-based company that provides medical care for small- and medium-size jails in eight states, according to its Web site.

The firm’s alleged inadequate treatment, Parks said, aggravated Eppinger’s agitated and eventually psychotic behavior that, on the fifth day of his incarceration, prompted guards to attempt to move him into an isolation cell, an action that culminated in his death. At the time of his death, Eppinger was in withdrawal from addictive drugs, Parks said, which had caused him to act bizarrely, saying that he was being attacked by purple and green squirrels and Jesus Christ, according to guards.

In his psychotic state, he feared guards were going to kill him, Parks said, which caused him to resist when they tried to move him. Eppinger curled up in the fetal position on the hallway floor, refusing to give the guards his hands for handcuffing, Parks said. While four guards tried to pry his hands away from his body, another guard, Deputy David Martin, placed Eppinger in a chokehold, inadvertently strangling him, Flint said in his opening statement.

The Fayette County jail was a defendant in the suit but settled, according to Phillip E. Friduss, of Hall, Booth, Smith & Slover, who represented the jail. He declined to disclose the terms of the settlement. The plaintiffs succeeded in getting Judge Camp to bar the defense from telling the jury about that settlement.

Earlier, the guard who accidentally strangled Eppinger avoided criminal culpability in the death when a Fayette grand jury declined to indict him, according to news reports. Flint and his partner, Shira Adler, said the tragedy boils down to this: The deputy did it. Martin was a “rogue deputy,” Flint said. He, and by extension the Fayette jail, were responsible for Eppinger’s death, not Southern Health Partners, Flint said.

But the plaintiffs’ attorneys, who also included David F. Walbert, said it’s not that simple. Judge Camp even granted them an extra 10 minutes to make an opening statement because of the case’s complexity.

In his opening statement, Parks told the jury of eight women and four men, “The worst possible elements of managed health care are going to come to the fore in this case. Southern Health’s program is structured to use the fewest number of outside medical resources as possible.”

Parks said the plaintiffs are questioning the practice of using for-profit medical providers in jails. If Eppinger had seen a doctor and been hospitalized for his drug withdrawal, he would never have become psychotic, thereby prompting the deputies to try and move him, Parks said. Parks said the nurses didn’t call in a doctor in order “to save money.”

Instead, the jail physician, Dr. Fajardo, who was an employee of Southern Health Partners, phoned in a prescription intended to help Eppinger with alcohol withdrawal. After Eppinger told jail nurses he was addicted to a prescription painkiller, the doctor prescribed another drug. What the doctor and nurses didn’t know-and Eppinger didn’t tell them-was that he also was addicted to GHB, an illegal steroid, Parks said.

By the night of his death, Eppinger said that “he was seeing squiggly lines, green and purple squirrels attacking him and cellmates trying to kill him. He was observed cowering under a table, convinced that Jesus Christ was trying to take his life,” Parks said. Eppinger then was taken from the general population to the intake area for observation by a nurse.

At 11 p.m., a nurse had Eppinger placed in a cell with another inmate because she thought he needed to be watched, even though sharing a cell would aggravate his anxious state, according to Parks. Then she left for the night, leaving the jail without any medical staff, Parks said, adding that the nurse didn’t tell guards Eppinger was undergoing drug withdrawal. “Withdrawal is a serious medical condition, which can lead to paranoid, psychotic behavior,” he said. “He should have been under observation by competent medical professionals. This is a violation of the standard of care,” he said.

“The jailers laughed at him. To those people, Eddie Eppinger was Corporal Klinger on ‘M.A.S.H.,’ shouting out crazy stuff trying to get a free ride to the hospital,” Parks said. “Eddie Eppinger started to die when Southern Health Partners put him in detox for alcohol instead of drug withdrawal, and then put him in the general jail population instead of taking him to the hospital,” Parks said. “They took someone who was psychotic, and not dealing with reality and put him in a situation where noncompliance had physical consequences. This is someone who refuses to follow orders because he can’t. In this case, that results in his death,” Parks added.

It was shortly after these remarks that Flint said he felt like he’d walked into the wrong courtroom. “This case is all about common sense,” he retorted. “What really happened was that a guard brutally choked Eppinger to death.” Flint opened his remarks to the jury by saying, “Judge Camp told you to take notes during this trial if you like. Well, I’m telling you to take notes on what I say, because I’m going to stick to the evidence.”

What constitutes evidence of a medical condition severe enough to require intervention is the crux of the opposing views of who is at fault in Eppinger’s death. While Parks’ opening statement focused on Eppinger’s mental state, Flint’s focused on his physical condition. “There was no increase in his blood pressure, heart rate or sweating. There is never a vital sign outside the middle range. There is no physical manifestation of withdrawal. All other signs of withdrawal are just things that Eppinger is reporting,” Flint said. That means, he said, that the nurses, and thus Southern Health Partners, did their job, which was to prevent Eppinger from having a seizure or any other life-threatening physical reaction to withdrawal.

“People going through withdrawal brought it on themselves,” he added, referring to Eppinger’s use of illegal drugs. Flint disputed the notion that the nurses ignored or didn’t pay adequate attention to Eppinger’s symptoms of withdrawal and psychotic behavior. One of the nurses noted in her log entry that Eppinger reported seeing “squiggly lines,” Flint said. However, he added, “She determined that this information was not significant compared to the fact that his vital signs were normal, and he was alert and oriented.”

What’s more, he said, the nurses never learned of some of Eppinger’s more severe delusions. For instance, the guards never told her that Eppinger thought Jesus Christ was trying to kill him, Flint said.

Both sides called on medical witnesses. On Wednesday, the plaintiffs called Dr. Robert B. Greifinger, the court-appointed monitor of medical conditions at the DeKalb County jail and the former chief medical officer for the New York State Department of Correctional Services.

In this case, “The system didn’t work,” Greifinger said. He said Eppinger should have been seen on and hospitalized by the second day of his incarceration, when he started hallucinating. The defense plans to counter with its own medical witness, Dr. Jeffrey Smith, the medical examiner for the Georgia Bureau of Investigation. “He did the autopsy and concluded that Eppinger died as the result of strangulation-that it was a homicide,” Flint told the jury, adding “You’ll see the incident on tape.”