"Their insight, expertise and
experience provided us with
invaluable guidance during times
when we faced critical decisions."
Lewis MasseyMassey, Watson & Hembree
Home
Our Team
A. Lee Parks Jr. 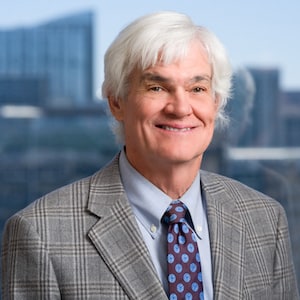 Lee Parks has been a leader in employment and civil rights litigation for over 40 years. He has represented hundreds of individual, corporate, and government clients in matters involving discrimination, wrongful terminations, whistleblower claims and voting rights.

After graduating from the University of Arizona, with honors, Lee received his law degree from Emory University Law School, where he was the Director of the Emory Moot Court Society and a member of the Editorial Board of the Emory Law Journal. He was admitted to the Georgia Bar in 1977, and practices before all state and federal courts and the U.S. Supreme Court.

Lee’s representative cases are too numerous to mention. He has acted as lead counsel in more than 100 jury trials in a wide variety of substantive matters, representing both plaintiffs and defendants. He maintains a national practice as a trial lawyer in a host of complex and notable cases. He was the plaintiff’s lead counsel in Miller v. Johnson, 515 US 900 (1995) and Abrams v. Johnson, 521 US 74 (1997), the first successful constitutional challenges to racially-gerrymandered Congressional and State legislative districting plans. He won both landmark cases before the Supreme Court. Lee was lead counsel in Johnson v. Board of Regents of the University System of Georgia, 106 F. Supp. 2d 1362 (S.D. Ga. 2000), in which he prevailed against racial and gender preferences in the university admissions process.

Lee has translated his courtroom and appellate victories into a premier mediation practice in conjunction with Henning Mediation and Arbitration Services. He is sought-after based on his ability to bring even the most contentious disputes to a successful conclusion. He is a quick study on any subject and can master the most complicated facts into a winning argument.

Mr. Parks, who was born in Ft. Worth, Texas, lives with his family in Atlanta. He turns to golf and fishing as his activities of choice, whenever his law practice permits.

Publications
Contact Us
Practice Areas
Client Reviews
★★★★★
Their insight, expertise and experience provided us with invaluable guidance during times when we faced critical decisions. Lewis M.
★★★★★
Just wanted to send a formal thank you note to emphasize just how grateful I am for the outcome of my case! You truly have taken the stress out of this unfortunate situation. N.S.
★★★★★
Very professional, updated me once a week, very thorough and knocked it out of the park. We got everything we were looking for. The overall staff was very encouraging and gave me the strength to keep going. Chris J.
View More
Submit a Law Firm Client Review